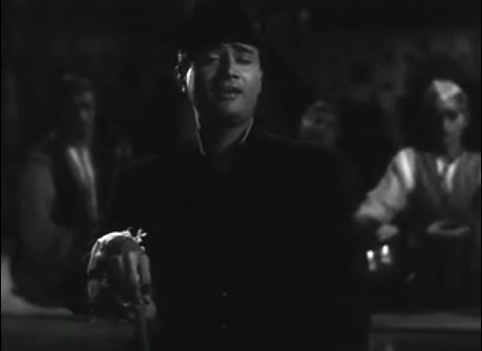 We now present our complete translation to “Hum Bekhudi Mein Tumko Pukare,” one of Mohammed Rafi’s finest solos. The song, and in fact the film Kala Pani (1958), is a considerable break from Dev Anand’s previous work, transforming him from the debonair urbanite to a meditative, black kurta pajama-clad member of the traditional intelligentsia. “Hum Bekhudi Mein” bears the unmistakable hallmark of S.D. Burman’s finest compositions—a hauntingly powerful melody that is so captivating, instrumental ornamentation is close to entirely abandoned. There is something reminiscent of his earlier composition, “Dekhi Zamaane Ki Yaari“–with an emphasis on reflection, the purity of Mohammed Rafi’s voice engulfs the listener in the qawwal-like trance of his yearning, the feeling of entering a dream where time loses its meaning. Indeed, the “bekhudi” or loss of self as described by the singer is precisely what lyricist Majrooh Sultanpuri aims to induce in the listener. 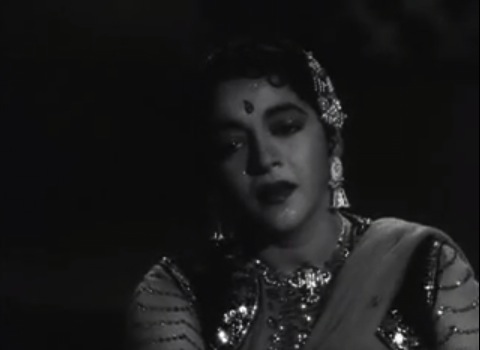 Nalini Jaywant believes she has found love at last in the mysterious stranger with a haunting voice in Kala Pani (1958).

The nuance of the lyrics is an exceptional example of the multi-faceted levels of interpretation of Urdu poetry. Each line returns to the refrain’s lingering “chale gaye”—a verb tense indicating continuity of the hero’s past actions, and his current obsession with reliving them. However, Mohammed Rafi’s very deliberate pause before singing “chale gaye” with each line allows for an additional dimension to the song’s interpretation, as if a forlorn reference to the woman herself who has left him (“woh jo chale gaye”). I love this song for every person that hears it will understand it in a slightly different way. If you can’t get enough of this melody, lovers of trivia will be delighted to discover that S.D. Burman actually recorded the original Bengali version of this song in his own voice, “Ghum Bhulechi Nijhum”!

In the Hindi version, hero Dev Anand elaborates on two forms of intoxication—first, the spell cast by his former lover, and second, alcohol to which he has resigned himself.  In the evocative final line of the song, “Sheeshe mei.N aap ko bhi utaare chale gaye,” the hero reconciles their duality and his escape from reality. With the oblivion granted by alcohol, he regains the very woman who has left him in a state of bekhudi—a philosophical wanderer in fugue-like search of a connection. 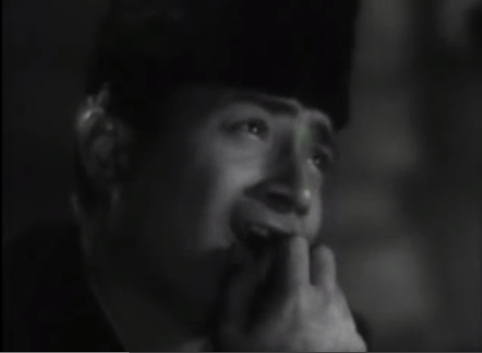 Despite biting his fingernails throughout the song, Dev Anand is simply too attractive to handle in a black kurta and matching traditional hat.

We hope you enjoy our English translation to the lyrics of this beautiful poem “Hum Bekhudi Mein” from Kala Pani (1958). Check out the video in which Dev Anand woos the lovely courtesan Nalini Jaywant with his artistic depth! Did you know that after this song was released, Dev Anand was actually told not to wear black anymore in public because Indian women  would swoon and jump from buildings upon seeing him dressed in that devastatingly attractive shade? I mean…I can see where they’re coming from!

Hum bekhudii mei.N tum ko pukaare chale gaye
Unaware of my own self, I kept calling to you
Saaghar mei.N zindagii ko utaare chale gaye
And so I kept drowning my life in a glass of wine
Hum…

Dekhaa kiye tumhe hum banke deewaanaa
When I used to see you, I was madly love
Utaraa jo nashaa to hum ne yeh jaana
Once that intoxication wore off, I knew this
Saare woh zindagii ke sahaare chale gaye
That all the support I had in life had gone

Hum bekhudii mei.N tum ko pukaare chale gaye
Unaware of my own self, I kept calling to you

Tum to na kaho hum khud hi se khele
At least do not say that I played this game by myself.
Doobe nahii.N humii yuu.N nashe mei.N akele
For I did not drown in this intoxication alone
Sheeshe mei.N aap ko bhi utaare chale gaye
You were what I kept pouring into my glass

Hum bekhudii mei.N tum ko pukaare chale gaye
Unaware of my own self, I kept calling to you
Saaghar mei.N zindagii ko utaare chale gaye
And so I kept drowning my life in a glass of wine
Hum…

Interestingly, this gently hypnotic song is used to trap Nalini Jaywant into falling in love with Dev Anand and confess her past crimes. Yes, it’s all a pretense–Dev Anand is actually in love with Madhubala, the cheeky journalist who is helping him absolve his wrongfully imprisoned father. Nalini Jaywant played a role in the original crime and must now the price of unrequited love for his son. The film was actually based on A.J. Cronin’s Scottish novel “Beyond This Place” published in 1953. Dev Anand loved Cronin’s work so much, he also later turned one of Cronin’s most famous novels, “The Citadel” into the 1971 Bollywood film Tere Mere Sapne.