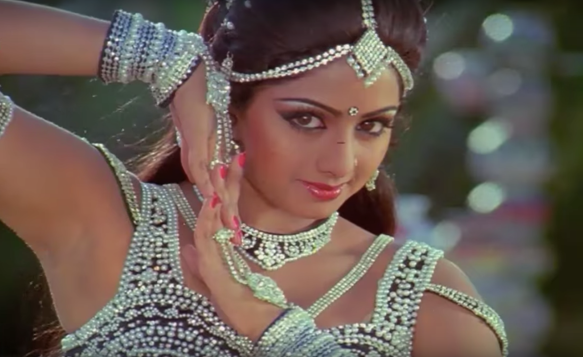 The untimely demise of Sridevi at the age of 54 on February 24, 2018 has struck fans of Indian cinema across the globe. Today, in honor of Sridevi’s legacy, we present the lyrics and English translation to “Nainon Mein Sapna” from her first superhit Bollywood film Himmatwala (1983).

Sridevi’s acting career began at the age of four and would go on to include 300 films over the span of more than four decades. As an actress in South Indian language films, Sridevi’s early performances highlight her capacity to portray nuanced roles without the glamor and glitz that pervaded the Bollywood industry. Sridevi’s first foray into the world of Hindi cinema as a leading lady occurred in Solva Sawan (1979), but her rise to Bollywood stardom occurred as the heroine in K. Raghavendra Rao’s Himmatwala (1983), a Hindi remake of the Telegu film Ooruki Monagadu.

Regarding her early success with Himmatwala, Sridevi has said in a 1987 interview:

In Tamil films they love to see me act naturally. But in Hindi films all they want is lot of glamour, richness and masala. My bad luck was that my first big hit in Hindi films turned out to be a commercial one (Himmatwala). When I did a character role in Sadma, the picture flopped. So people started casting me only for glamour roles. But one day I’m going to prove to everyone that I can act also.

Following Himmatwala, Sridevi had a string of Bollywood hits in the 1980s and ’90s, soon becoming one of the most sought after actresses in the industry. Some of her most notable works include Mr. India (1987), Chandni (1989), Chaalbaaz (1989), Lamhe (1991) and Khuda Gawah (1992). After a 15-year hiatus following her controversial marriage to Boney Kapoor, Sridevi made an endearing comeback in English Vinglish (2012) as a Hindi-speaking housewife who takes on learning English for the first time in Manhattan. Most recently, Sridevi starred in Mom (2017) as a vigilante mother who avenges the rape of her daughter, which was the actress’s 300th and final appearance on screen before her death.

With her unparalleled charisma and signature big eyes, Sridevi won the hearts of millions of fans across the world. Given her massive popularity and exceptional body of work, she is widely considered to be Bollywood’s first female superstar. As we mourn the untimely loss of an icon, we send our heartfelt condolences to Sridevi’s family during this difficult time.

Do you have a favorite song featuring Sridevi? Let us know in the comments!

LATA: tuu nahii.n, mai.n nahii.n
There is not just you or just me.
ab dil ik hai
Our hearts are now united as one.
do tan ik praan, do dil ik jaan
Two bodies with one soul, two hearts with one life.
manzil ik hai
We now have the same destination.

KISHORE: arre saa.nso.n me.n ho.nTho.n pe
Oh! In my breaths and on my lips,
teraa hii naam hai
only your name resides.
lenaa denaa hai kyaa mujhe duniyaa se?
I have nothing to give or take from this world,
tujh se kaam hai
for I am only attached to you.