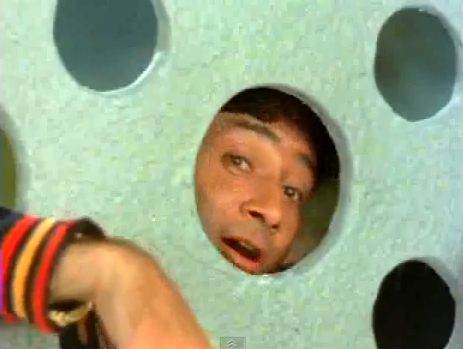 Dev Anand gazes longingly at Hema Malini through the kitsch 1970s windows of her living room in Johnny Mera Naam.

Next we present the lyrics and full English translation to “Pal Bhar Ke Liye Koi,” a timelessly catchy Dev Anand jingle from the 1970 blockbuster Johnny Mera Naam. The film became the highest grossing film of Bollywood in the 1970s, and the soundtrack rose with it to glory bringing hits like this playful Kishore solo, the duet “O Mere Raja,” and Lata’s “O Babul Pyaare.” Johnny Mera Naam is an action-thriller-mystery with a splash of glamour by the gorgeous Hema Malini and a touch of class from Pran. Those were the golden days when the name “Johnny” in Bollywood implied the height of suavity, second perhaps only to the villainous sophistication of “Robert!” While the film’s storyline does not quite match up to the genius and spectacle of his earlier films of a similar genre like Jewel Thief (1967), Johnny Mera Naam delivers good clean fun for the whole family.

“Pal Bhar Ke Liye Koi” is one of the all-time cutest songs picturized on screen. Besides the fact that Hema Malini probably wears a saari better than any actress of yesteryear, I love the set design. Hema Malini has to literally shut every single window and blind in the house to keep Dev Anand from singing to her from outside, and the designer was forced to get really creative! I love the painting that’s actually a hidden window and the the strangle holed wall that Dev Anand uses as handcuff props. It’s adorable how he tries to woo her throughout the song, begging her to just pretend to love him–and then the clever zinger of an ending where he throws it back in her face! It’s also one of the last Dev Anand films where I feel like he is still pulling off acting the hero and flirting with younger women. As much as we love him, we wish he had not acted in too many films past this…but that’s another story.

Hema Malini cleverly disguises a window with a traditional oil painting in the wacky fun house of the Johnny Mera Naam (1970) sets.

Below enjoy our English translation of this ever-popular Kishore Kumar song. Did you know that this song was even featured at the end of a Simpsons episode in 2006 entitled, “Kiss Kiss Bangalore”? You’re killing me, people.

Hum ne bahut tujhko chhup chhupke dekhaa
I have often viewed you secretively
Dil pe khiichii hai tere kaajal kii rekhaa
The darkness of your eyeliner is etched on my heart
Kajal kii rekhaa banii Lakshman kii rekhaa
That line has become a line of control now
Ram mei.N kyuu.N tuu ne Raavan ko dekhaa?
Why did you mistake Ram for Raavan?
KhaDe khiDkii pe jogii, swiikar kar le
At your window stands a Yogi, accept him
JhuTa hii sahii
Even if your acceptance is a lie
Pal bhar ke liye koii hume.N pyaar kar le
Let somebody give me momentary love
JhuTa hii sahii
Even if it is false

Maanaa tu saare hasiino.N se hasii.N hai
I agree you are the prettiest of the pretty
Apnii bhii surat burii to nahii.N hai
But my face isn’t too bad either
Kabhii tu bhii humaaraa diidaar kar le
Why don’t you sometimes take a look at me?
JhuTaa hii sahii
Even if you are faking
Pal bhar ke liye koii hume.N pyaar kar le
Let somebody give me momentary love
JhuTa hii sahii
Even if it is false

Pal bhar ke pyaar pe nisaar saare jeevan
For a moment of your love, I would sacrifice my entire life
Hum woh nahii.N jo choD de teraa daaman
I am not someone who would leave your embrace
Apne honto.N kii ha.Nsii hum tujhko de.Nge
I will give you the laughter from my lips
Aa.Nsoo tere apni aa.Nkho.N mei.N le.Nge
And I will take the tears from your eyes
Tuu humaari wafaa kaa ek baar kar le
Believe in me just once
JhuTa hii sahii
Even if I’m just lying!

Pal bhar ke liye koii hume.N pyaar kar le
Let somebody give me momentary love
JhuTa hii sahii
Even if it is false

Note that I’ve translated “JhuuTaa hii sahii” in many slightly different ways throughout the song’s translation, to match the meaning in each stanzas particular context. But he’s basically always just saying if it’s a lie, that works too.

My favorite line from the song is from the final antra is: “Pal bhar ke pyaar pe nisaar saaraa jeevan.” Nisaar is such a fabulous Urdu vocabulary word that works so poetically right here before the word saaraa. Unfortunately, this stanza is often missing from most recordings that people have of the song (see our post on songs with hidden stanzas for more!) And without this final stanza in which initially Kishore’s voice becomes the most sweet and sincere of the whole film, you miss the whole surprise ending where Dev Anand shows that he can be just as sassy! Such a shame.

This song request came from one of our absolute favorite readers Bhuvesh! Always, if you have a request for a translation or post, be sure to send us a message!