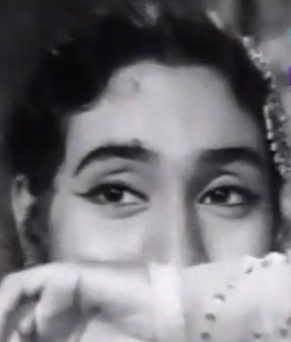 Who wouldn’t want to exchange glances with those eyes?

For today’s post, we showcase the lyrics and English translation of “Nigahen Milane To” from the film Dil Hi To Hai (1963). If I had to name my favorite actress from the Golden Era of Bollywood cinema, I think that I would pick Nutan.

As one of the beloved goddesses of India’s silver screen, Nutan starred in many evergreen films from the 1950s and 1960s, including Paying Guest (1957), Anari (1959), Bandini (1963), and Milan (1967), just to name a few. In my opinion, there’s something special about Nutan’s performances that sets her apart from her peers. She played her roles with a dignified beauty, a restrained grace, and an acute intelligence that was difficult to find in other actresses of the time. Here, I’ve chosen to translate a song from Dil Hi To Hai (1963), a charming Bollywood romance that is enjoyable to watch even though it is one of Nutan’s lesser-known films.

Nutan stars in Dil Hi To Hai as Jamila, the beautiful daughter of a wealthy London-based banker. Here, Raj Kapoor departs from the image established in his previous films by playing a comic double role as Jamila’s love interest Chand and Jamila’s aged music teacher Khan Sahab. While the film features some memorable performances by Nutan and Raj Kapoor, this film is probably even more memorable today for its soundtrack composed by music director Roshan. Two gems from this soundtrack have survived the test of time. The first is the Bhairavi-based classical number “laagaa chunarii me.n daag,” which is regarded as one of the best songs of Manna De’s career. The other gem is Asha Bhonsle’s exquisitely rendered Yaman qawwali “nigaahe.n milaane ko jii chahtaa hai,” which I have translated here.

Penned by Sahir Ludhianvi, this qawwali centers around a woman’s desire to exchange glances with her beloved. The romanticization of eyes and sight is a common theme found in Bollywood films, and the poetry in this song is one of this era’s most cherished portrayals of this theme. The song’s charm is enhanced by the use of Urdu vocabulary (e.g. tahumat and tamhiid) and Asha Bhonsle’s immaculate rendition. Don’t you just love the way she owns those octave glides during the sargam passage?

Mrs. 55 and I actually performed this qawwali at Harvard during the annual South Asian cultural show Ghungroo two years ago. One thing that we noticed after listening carefully to these lyrics during rehearsal is that there is some ambiguity in gender. While most of the song appears to be from a female perspective, we thought that lyrics take on a masculine role for the line starting with “jab kabhii mai.ne teraa chaand-saa chahraa dekhaa…” (Whenever my eyes have fallen upon your moon-like face…). In addition to the fact that the moon is traditionally used by males to describe feminine beauty (e.g. Mohammed Rafi’s “yeh chaa.nd-saa roshan chahraa“), Nutan’s gestures and body language become more masculine in nature in this segment of the song. In fact, as she sings these two lines, Nutan begins to walk with a manly gait and and then flirts with a female friend as if she is her male lover. We may have totally made this up in our heads, but it was not uncommon for such gender-bending to occur in Bollywood songs–a full post on this trend will be coming up soon! In any case, please enjoy this timeless qawwali while following along with our translation/glossary provided below, and remember to send us your requests for any other songs that you would like translated.