Everyone loves a bit of filmi gossip. I have been meaning to watch the film Abhiman (1973) ever since I discovered sometime in elementary school that Amitabh Bachchan was actually married (and now an old man) and to none other than Jaya Bhaduri. Like other Bollywood classics that are spicily known to mimic life itself, such as Kaagaz Ke Phool (1959) or Silsila (1981), Abhiman too has a wealth of behind-the-scenes parallels.

The film tells the story of a husband and wife singing duo—and the rift that forms between them as her career far overshadows his. Before I discuss the gender stereotypes that run rampant in this film, did you know that Abhiman is rumored to be based upon real-life singer Kishore Kumar’s relationship with his first wife Ruma Guha Thakurta? Given that Kishore sings half the songs of this film, it gets pretty juicy. Ruma was a hugely successful Bengali singer and actress (not to mention the niece of legendary filmmaker Satyajit Ray!) whose career was soaring during the time of their marriage. Ruma’s songs were super hits in the Bengali industry and she acted in more than 100 films, starting as a child actress. Kishore and Ruma married in 1951, had a son together Amit Kumar (who was a reasonably successful playback singer himself in the 80s), but the two divorced in 1958. In fact, Kishore proposed to his next wife Madhubala while still married to Ruma. Don’t you just love it?

Kishore Kumar with his first wife Ruma Guha Thakurta and their son Amit Kumar (circa 1953).

The gossip gets even better. After filming Abhiman, Jaya Bhaduri edged out of the acting industry to play housewife while Amitabh continued to make some of his greatest hits—the reason? At the time, people strongly suspected it was in order to prevent art mimicking real life! She was afraid of her own marriage suffering the fate of the marriage they had portrayed together on screen. Whether that’s completely true or not, we certainly don’t know—but their rocky relationship (and Amitabh’s later affair with Rekha) was certainly a hot subject of tabloids for years.

Furthermore, Jaya actually went to Lata Mangeshkar studio recordings for research for her character. In the film she mimics how Lata used to hold her saarii and stand on stage. You might even go so far as to say that this film represents what might have happened to Lata Mangeshkar herself had she married! Ah, the drama.

As far as the movie goes, beyond pure gossip value and an amazing soundtrack, Abhiman doesn’t do much but make your blood boil in one long heteronormative manifesto. 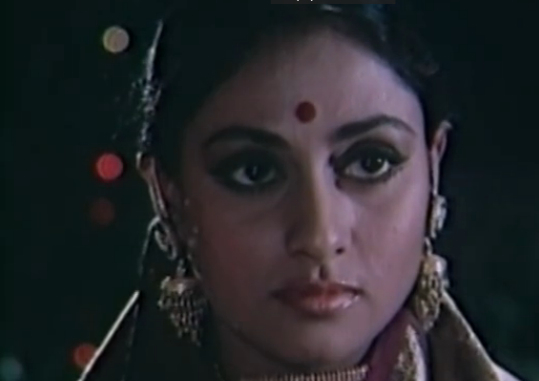 Amitabh can only be happy when he is the bread-winner and when praise of his wife reflects a praise of his decision to marry her. But when Jaya is recognized as an individual talent, he is unable to bear the competition—she’s a better singer, brings in better money, and let’s face it, better looking. So naturally, being a modern man, he turns to alcohol and the company of other women. Meanwhile, the pure-hearted wife stays a social recluse in her husband’s house, yearning for his return.

The film takes an interesting twist—Jaya miscarriages and Bollywood simplifies this emotional tragedy by turning Jaya into a living statue whose only hope for recovery will be to hear her husband sing again. After all, that was her only wish in life, right? Amitabh even goes so far as to suggest electric shock therapy for her. I almost died.

The film’s overt “male gaze” turns Jaya into unintelligent object of curiosity and manipulation–a far cry from that vibrant and talented woman who once threatened her husband’s social sphere. There’s something disturbing about this message, but hey, what do I know. If you’re looking for a far more realistic portrayal of a similar situation, check out Judy Garland’s performance in A Star Is Born (1954), but otherwise enjoy S.D. Burman’s sublime soundtrack without tainting it with what Abhiman will attempt to pass off as completely normal gender expectations of the period.