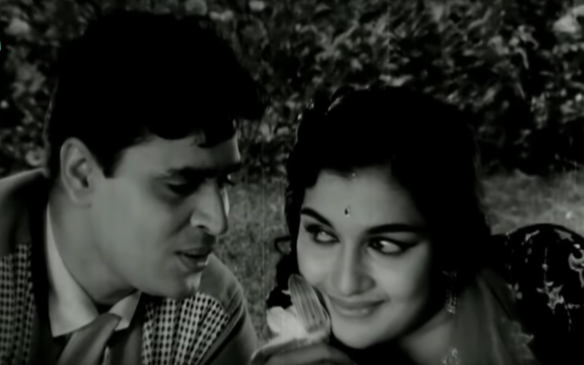 Today, we present the lyrics and English translation to “Husnwale Tera Jawab Nahin” from Gharana (1961).

Penned by Shakeel Badayuni and composed by Ravi, this song stands out as an eternal favorite in the genre of Bollywood courtship songs, which includes gems such as “Chaudavin Ka Chand Ho” and “Mere Mehboob Tujhe.” Here, Mohammed Rafi lends his silky vocals to Rajendra Kumar, a pairing that dominated the silver screen throughout the ’60s.

This song is filled with several common tropes found in Urdu poetry that are employed to describe a woman’s beauty. These include similes to the Moon, the flowers of springtime, and the intoxication of wine. Interestingly, while “black cloud” has a negative connotation in English, the phrase kaalii ghataa is used here and frequently in other Urdu-Hindi poems to admire the dark color of a woman’s tresses.

The grammar police out there may be wondering: why has the poet chosen to refer to the object of affection here using the male vocative husnvaale instead of the feminine husnvaalii? The answer to this question can be found by understanding the historical origins of the Urdu ghazal, a form that borrows heavily from the Persian tradition. Unlike Urdu-Hindi, the Persian language does not distinguish gender among pronouns/objects. In keeping with this tradition of gender neutrality, Urdu poetry often refers to female objects of affection using masculine pronouns, leaving it up to the reader to perceive gender using other contextual clues. Now you know!

Despite being a quintessential romantic here of the 1960s, Rajendra Kumar never received a Filmfare Award.

terii surat jo dekh le shaayar
If a poet were to behold your face,
apne shero.n me.n taazgii bhar le
it would fill his couplets with new passion.
ek musavviir jo tujh ko paa jaaye
If a painter were to meet you,
apne khvaabo.n me.n zindagii bhar le
it would fill the creations of his dreams with new life.
naghmagar DhuunDh le agar tujh ko
If a songster were to find you,
dard bhar le voh dil ke taaro.n me.n
his tune of melancholy would pull at the heartstrings.