Although Asha Bhonsle is perhaps most well-known for her seductive and playful songs (see our translation of “raat akelii hai” here), she was a truly versatile artist who had an excellent command over a range of styles and emotions. When she is in a serious mood, Asha can really tug at your heartstrings with her sad singing. Think “ab ke baras bhej bhaiyya ko babul” from Bandini (1963), “yeh kyaa jagah hai dosto” from Umrao Jaan (1981), or “meraa kuch saamaan” from Ijaazat (1987).  Here, I’ve translated a short yet painfully beautiful Asha solo from Baharein Phir Bhi Aayengi (1966) called “woh hanske mile humse.”

Baharein Phir Bhi Aayengi was released posthumuously under Guru Dutt’s film banner after Guru Dutt’s demise in 1964. The film was not even complete half-way before Guru Dutt’s death, so the film was shot again with a new director Shahid Lateef and new hero Dharmendra. Although the movie itself lacks the magic found in older Guru Dutt films, O.P. Nayyar’s soundtrack for the movie is still remembered today, most notably the Rafi number “aap ke hasiin rukh pe aaj nayaa nur hai.” 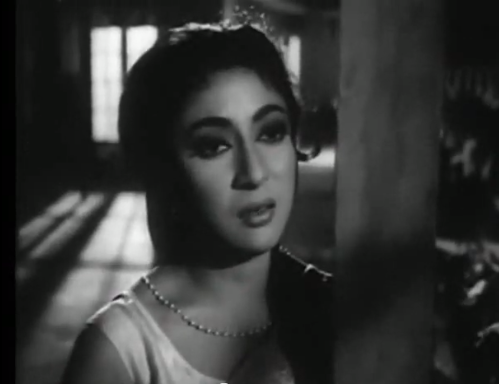 The movie’s plot focuses on a love triangle: handsome young news reporter Jitendra (played by Dharmendra) falls in love with the bubbly Sunita (played by Tanuja) while Sunita’s older sister and head of the newspaper Amita (played by Mala Sinha) eventually becomes smitten by Jitendra. Before Amita decides to reveal her feelings to him, she finds out that Jitendra is actually in love with  Sunita. Although she is devastated by this news, she decides to back away for the sake of her sister’s happiness.  Here’s where the song I’ve translated comes in. Backed by Asha’s painstricken vocals and S.H Bihari’s simply crafted lyrics, Amita laments how she misinterpreted Jitendra’s actions to think that he was in love with her when that was not the case (“bekaar hii ulfat kaa izhaar samajh baiThe”). Sigh…

I think this song will strike a chord with those of you who have suffered through a romantic misunderstanding–it certainly did with me.

woh ha.nske mile ham se, ham pyaar samajh baiThe
He smiled at me when we met, so I thought that he loved me.
bekaar hii ulfat kaa izhaar samajh baiThe
I interpreted it, in vain, as a declaration of love.

aisii to na thii qismat apnaa bhii koii hotaa
It was not in my fate to call someone my own.
kyo.n khud ko muhabbat kaa haqdaar samajh baiThe?
Why did I consider myself entitled to his love?

roye.n to bhalaa kaise, khole.n to zabaa.n kyo.n kar?
How shall I cry, why should I speak?
Darte hai.n ki jaane kyaa sansaar samajh baiThe.
I fear what society has perceived of this.

woh ha.nske mile ham se, ham pyaar samajh baiThe
He smiled at me when we met, so I thought that he loved me.