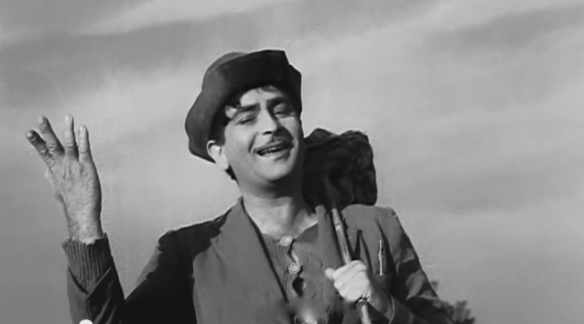 Today we showcase the lyrics and English translation of “Mera Joota Hai Japani” from Raj Kapoor’s Shree 420 (1955) to mark the occasion of India’s Independence Day! Shree 420 is truly a landmark film in Hindi cinema starring a legendary showman who became known from Bombay to Bulgaria. To understand the film and the ramifications of the enormously popular song of patriotism, “Mera Joota Hai Japani,” we turn to the context of the nation’s not-so-distant past.

When India awakened to independence from British rule in the summer of 1947, the country faced many barriers to united prosperity under Prime Minister Jawaharlal Nehru’s integrated social programs. While the freedom for which it had fought for generations was now realized, the Partition divided the Northern boundary of the nation between Muslims and Hindus, bolstering a mutual fear and hatred that seeped into the many ethnically diverse major cities. There, in turn, a rapid industrialization ideologically distanced the surrounding villagers from the urbanites, and a booming economy further isolated and redefined the gentry and the working class. While the geographic and cultural bars of much of Southern India allowed for a lesser degree of revolution, the Northern states, especially in the metropolises like Bombay where Bollywood blossomed, underwent a dramatic change that was felt at some level by the majority of inhabitants. Some strove to achieve a balance between the traditions of old and the advantages of Westernization, others the romanticism of rural life versus modern city life, and as always, the penniless lower classes wished to close the widening economic gap between themselves and the teeming wealth of the industrialists. In this maze of contradictions and extremes, Nehru tried nobly to guide the nation into forming a unique identity of its own as it moved into the future.

The elaborate family dramas and mythologicals of pre-independence Bollywood, therefore, no longer completely satisfied the country’s cinematic needs. Raj Kapoor was among the major influential directors and actors that emerged in the early years of independence whose work changed the face of Indian film. With the surfacing of a new middle and lower class audience, he sought to restructure the accessibility and impact of Indian cinema. Raj Kapoor (whose self-proclaimed audience was the underdog and downtrodden) responded to the socio-economic tensions of Nehru’s India through highly stylistic proletariat films that glorified the virtuous poor. His Chaplin-esque comedic appeal and playful optimism made him an iconic figure domestically and across the Middle East and Soviet Union. As a director of many of the era’s greatest hits such as the classic comedy, Shree 420, he established in the 1950s what now seems to be the “formulaic” Bollywood film. His plots mingled wholesome entertainment with social tension, dramatic one-liners, catchy show tunes, and the invariable triumph of Indian purity in the poor over the decadent Westernized ways of the rich.

Shree 420 is the story of a young man, Raju, who wanders from the countryside to find opportunity in city society. With an innocent smile and optimism, he strolls down the street famously singing love for his homeland in “Mera Joota Hai Japani.” His humble cheerfulness and patriotic pride captures the spirit of Nehru’s hopes and ideals for the blooming nation of a newly independent India threatened by corruption. 420, the well-known number from which the film derives its title, is the Indian penal code for fraud and dishonesty, and foreshadows Raju’s discovery of the means to survive in “modern” society.

Shree 420 was a milestone production under the R.K. Studios banner that was among the first to be produced, directed, and acted in by Raj Kapoor himself. The son of a widely respected and extremely wealthy actor of the previous era, Prithviraj Kapoor, Raj Kapoor was nurtured in the film industry and had little difficulty in starting his own company with a very liberal amount of freedom. Formed in 1946, R.K. Studios went on to create some of the most successful films of Indian cinema. With lyrics by Shailendra and the soulful voice of Mukesh, we hope you enjoy our English translation of the lyrics to one of the thespian’s most beloved solos, “Mera Joota Hai Japani!”

Ho.Nge raaje rajkanwar ham bigaDe dil shehzaade
I will become the prince of fallen hearts
Ham singhaasan par jaa baithe.N jab jab kare.N iraade.N
I will sit upon a throne whenever I desire
Surat hai jaani-pehchaanii, duniyaa walo.N ko hairanii
My face will become familiar, it will be a surprise to the world
Sar pe laal topi Ruusi phir bhi dil hai Hindustani
On my head is a red Russian hat, nonetheless my heart is Indian
Mera juuta hai Japaanii…

Raj Kapoor elegantly transitions with a cross-fade from rural India to a bustling city at the end of “Mera Joota Hai Japani.”

In the 1960s Raj Kapoor would drop his former image of the lovable proletariat and direct movies that resonated as family dramas of the wealthy, an increasing surrender to commercialism. The socio-political atmosphere of India had changed, and with it, the wants of the people. Movies that emphasized the difficulties of the developing period of the nation, or the unforgiving nature of that society were not the sell-outs they once were. The transition to a new era was over.

My fiance and I camel-spotting à la Raj Kapoor on our journey from New Delhi to Agra in a recent trip! Phir bhi dil hai Hindustani, as they say…