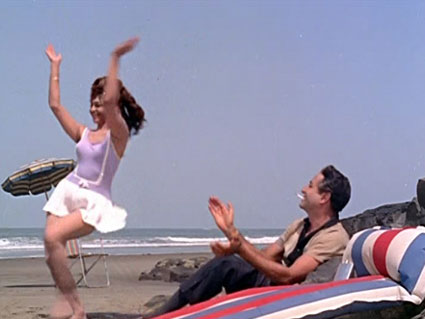 Helen and Pran forget their worries in Gumnaam (1967)

There’s been some buzz lately about the Italian Heineken “The Date” commercial featuring the music from Mohammed Rafi’s “Jaan Pehchaan Ho.” The commercial is fairly trippy, and sadly cuts out all of the actual singing, leaving only the musical introduction, interludes, and awkwardly enough, strange high-pitched male laughter. I’ve got two comments to make about this:

1. If you’re gonna take a Rafi song, why is the setting of this commercial East Asian instead of Indian? C’mon now, people.

2. More fundamentally, how on earth did the ad agency responsible for this come across this song and convince everyone involved of its advertising magic? Either a. someone had heard it used over the title sequence for the movie Ghost World, or b. someone knew it in its original form and had the guts, craziness, and pride to show it publicly. I can only hope it came from a fellow Rafi fanatic who is willing to boost the cause at any price to personal dignity. If it had been me who had a chance to bring glory to the Rafi name, I might’ve chosen the slightly more melodic/catchy “Badan Pe Sitare” or “Nain Milaakar“, which both seem to fall in the same category of hep cat club song. But that’s just me.

Let’s take a closer look the film, Gumnaam (1965) from where this song actually came. For all the Agatha Christie fans out there (and I’ve read all her books–no seriously, ALL of them), you may have been let down thinking that the best filmic interpretation of And Then There Were None was an obscure 80s Russian adaptation that has not been properly subtitled. Well, it’s your lucky day! Say hello to Gumnaam, a kitschy, melodramatic, and thoroughly enjoyable Bollywood adaptation of the Agatha Christie classic.

The film actually follows the basic outline of the plot pretty closely, adding in some extras for spice including the fantastically diverse soundtrack, an absolutely ridiculous dream sequence, and a mysterious ghostly element rendered by Lata’s vocals with the theme, “Gumnaam Hai Koi.”

As an aside, did you know “Gumnaam Hai Koi” is actually Lata’s cover version of the theme song to the 1963 American film Charade starring Cary Grant and Audrey Hepburn? Life is full of surprises.

The cast of Gumnaam is also a great mix of favorites–Manoj Kumar, Nanda, Pran, Mehmood as Butler, and none other than Helen in an actually fairly significant acting role. Sure, she’s got her usual crazy dance numbers (not to be missed!), but overall, if you have an open mind and three spare hours of your life that you know you will never get back, this film is pure deliciousness. And for all the Christie fans, the brilliant twist of the original novel takes on YET another twist in the climax of this film, so don’t think you know what’s coming! 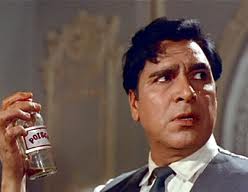 Poison??! What a total surprise!