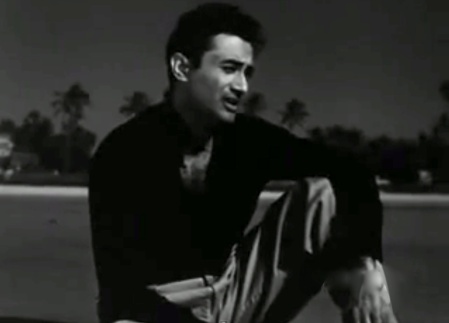 Dev Anand stares at the lonely beach in “Jayen To Jayen Kahan” from Taxi Driver (1954).

Next we present the full lyrics and English translation of “Jayen To Jayen Kahan” from Taxi Driver (1954). It’s one of yesteryear star Talat Mehmood’s most beloved solo hits. For anyone in the crowd who is unfamiliar with Talat, I’m truly saddened for your sake, but actually not entirely surprised. He’s one of the great unsung heroes of Bollywood who’s place in musical history was undermined with the rise and domination of Mohammed Rafi and Mukesh by the 60s. At least Hemant Kumar wrote his own film compositions and could conveniently cast himself as singer! But Talat was classy. While largely remembered for his legendary mark in ghazal-dom, Talat actually gave Shammi Kapoor his first hits in the 50s before Mohammed Rafi entered the scene. Yes, Talat was edged out of the business like a budding flower before Autumn. And did I mention he was so incredibly good-looking for a playback singer that he also acted in several films?

I could go on and on about my love for Talat and his velvety smooth voice, but let’s stay focused. Like later Dev Anand hit CID (1956), Taxi Driver is a really wonderful glimpse at chaotic and quaint 1950s Bombay city life. Told through the creative eyes of Chetan Anand (director and Dev Anand’s brother), the film is forever locked in its own charmingly antiquated society and street life of a bygone era. Most importantly, behind-the-scenes, Dev Anand was falling in love with his sensuous on-screen partner, Kalpana Kartik who would become his wife! It’s one of the few times you’ll see the two together (check out Baazi (1951) or Nau Do Gyarah (1957) for more!) and the juiciness of it all makes the film fun for the whole family. As Kalpana (AKA Mona Anand) later recalled:

I still remember our midnight marriage on the sets of “Taxi Driver” in 1954. Dev was a shy, youthful person, very co-operative and sensitive. We passed six decades together amid a lot of thick and thin. Whenever I heard rumours that he would desert me, I laughed my heart out. I knew that nomadic Dev would always be mine.

Cute, right? The hit philosophical song of the film “Jayen To Jayen Kahan” is sung first by Talat and later by Lata in the reprise–adding a touch of melodrama to the action. It’s beautifully picturized–the Talat version feels like an early Ozu film and carries a heavy weight with it. The careful cinematography allows time to pass slowly in a way that removes the viewer from the material world of the film and completely engulfs them in the philosophical queries of the song. Lyrics are, of course, by the great Sahir Ludhianvi. It’s a must-see for fans of early cinema!

So without further ado, enjoy the lyrics and English translation to “Jayen To Jayen Kahan“! We’ve got you the male and female versions below (click here for the Talat version video!).

Mayuusiio.N kaa majamaa hai.N jee mei.N
A crowd of disappointments resides in my soul
Kya reh gayaa hai is zindagi mei.n
What is left for me in this life?
Ruuh mei.N gham, dil mei.N dhuuaa.N
In my soul is sadness, in my heart is smoke

Unka bhi gham hai, apna bhi gham hai
She has her sorrows, I have my own
Ab dil ke bachne kii ummiid kam hai
Now there is little hope of saving my heart
Ek kashTii, sau tuufaa.N
For it is like a single boat against a hundred storms

Seene.N mei.N shole, saa.Nso.N mei.N aahe.N
In my chest are embers, in my breaths are sighs
Is zindagii se kaise nibhaaye
What is there for me to fulfill in this life?
Har jazabaat hai viiraan
My every emotion is empty

I think the most important question here is, who sang it better: Lata or Talat? At the risk of being strangled by Mr. 55, I think it’s pretty clear the answer is Talat. It’s one of the few songs that just was not written for Lata–it sounds a little strained coming from her, if I dare say so. Talat, meanwhile, sounds like an effortless dream as always. A Talat Mehmood hit was requested by reader Suman! Send us a message if you’ve got a request too! 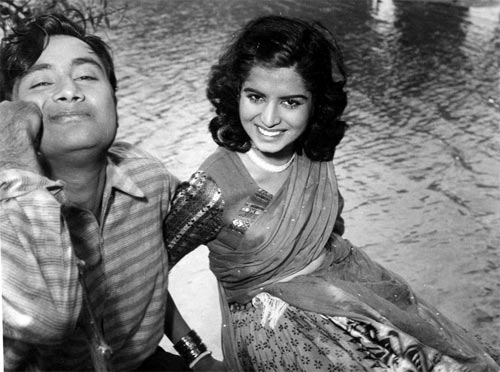 An adorable early rare photograph of Dev Anand with his wife Kalpana Kartik.